Tango constitutes one of the most significant expressions of Rio de la Plata culture. This inmaterial heritage expression has been transformed ever since it was born: from the suburb to the brothely  mood; from the dance hall tango to the tango as a song.

Each one of these forms had a social, politic, economic and cultural frame that gave it particular characteristics and explains it as well.In every period those expressions took place in particular spaces that gave them a special care.

A place is a physical or geographical space, full of a certain social sense that confirms the presence of its own inhabitants.

Refering to Tango,  the old yards, the riverside rancho houses, Recoleta tents, the tipical “conventillos” (comunitarian houses) courtyards, cinemas and theatres with tipical orchestras, cabarets, restaurants and coffee houses; the social recreative clubs, the dances in the courtyard of the neighbourhood, etc. are only some of the places to be mentioned here.Each one shows  a moment in Tango’s development.Though many of them have dissapeared, some of the ones that still survive have been rescued in the last years,  but with inorganic intervention programs.

These places have their own story and are, at the same time, historical landmarks.

As related spaces they are different between them, they show the complex territorial structure and define a meeting enviroment, as well.They express Rio de la Plata’s identity and let “the others” see us in our individualities, and propitiate ways  to build our identity.

The Tango was born in big Rio de la Plata capital cities, between 1850 to 1880. Social classes that held it were black and mulato men as well as the “gaucho”and inmigrant people, just arrived from Europe.

It was born in a place inhabited by harbor workers, sailors, cart drivers, “cuarteadores”, labourers.Also in places inhabited by men only, who used to go to dancing houses for fun, in the ambulant brothels that followed the troops, managed by  prostitutes, brave knife in the garter women (chinas cuarteleras).

At the beginning, “candombe” (blackmen percussion music) and tangos were brought from the carnival parades. It is the “prototango”  performed by “payadores” (travelling minstrels) who wandered with their guitar around the  towns, stopping in every “pulpería”  (rural saloon). 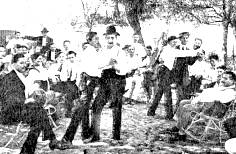 About 1880, brothels multiplied, ruled by immigrant women from Spain, France, Italy, Germany, Poland; they would be “milonguitas” (1). In these  places, Mazurkas, Polcas, Habaneras and Fandangos developed into “Milongas” and “tango orillero” (suburb tango).

The male character was a milonga dancer, vicious, lazy and quarrelsome, with a courage and passion component. ”Guapos” and “Malevos” mentioned in many songs, appeared.

Many brothels, in order to amuse their public, booked different musical groups; that tango is performed with two or more instruments; Trio is a popular form with flute, violin and guitar.They became so successful that spred tango into the cities, with little organs performed in every street corner.

At the end of XIX century another instrument is added: “Bandoneón” brought from Europe to Buenos Aires. This period shows intuitive and illiterate musicians with musical openings that sign tango’s destiny. Most of lyrics in first tangos resemble brothel origins. Some lyrics remember women world, other are picaresque or even  pornographic. They talk about prostitutes, genital organs, sexual intercourse. During the last decade of XX century, very famous tangos as Don Juan ( 1898) propitiate this kind of music popularization.

From this first period, “the places of tango” were the dance houses at the end of XIX century,tango is performed –danced- in the suburbs, in brothels and in lounges where rythm and dance were made of candombe and habaneras.

From these origins “el corte”  and “la quebrada”-dancing expressions  appear.In the suburbs, by the river, men practice to learn the difficult steps toghether. They used to dance in the family courtyards or in the streets, during the evening and night, but the final parctice is resumed between male and female, in “peringundines” – sort of small brothels-(2) as Parda Adelina’s, China Rosa’s Madame Blanch’s. Prostitutes dance with clients in halls or courtyards.It is possible there, to embrace the partner, tighten to his/her body, and play a sort of skill game.

“Niños bién” (wealthy young people) as well as “tauras” (quarrelsome men ) used to participate in these houses where music, dance and entertaiment were toghether. In more elegant places, as Maria La Vasca’s or Laura’s, one could listen to piano solos, duets and trios, including guitar, violin, flute.

We set this period between the end of XIX Century and the end of World War I: it was called  “era tanguera del pentagrama” (tango pentagram era) in wich tango develops a defined structure able to be written.

Gaucho clothes (chiripá, bombachas, corralera, rastra) are being changed by a short coat, tight trousers and urban shoes; the rural appearance are only shown in Paris or some movies.

Proffesional dancers appear.Casimiro Ain, who learned to dance from the little street organs, reaches his mayor fame dancing in the mitical “El Garrón” cabaret, argentinian exclusive place in Paris.It’s been said that writer Ricardo Güiraldes was the first one to dance tango in that city in 1910; two years later Europe loved it meanwhile the Buenos Aires society wasn’t accepting to dance it.

The King of Tango, (Bernabé Simarra) in gaucho’s look, successes in the Paris Folie Magic or the Venice Lido theaters.

Around 1910, in Buenos Aires,  the “Mercado de Abasto” (Mayor market) surroundings  were proper for its development.

Women in popular districts accept to dance it, as well as men that practice it  on the streets.

Popular music hidden in the suburbs, starts to get slowly into the urban areas.The Old Fashioned Guardia is a  time of music, dancing and women lounges, following the cabarets french tradition.

Tango stays in mitological scenes of  Buenos Aires, as well as street corners would develop ledgends of “guapos” and “malevos” (brave quarrelsome  men).Tango is performed in shops and political comitees and bars and coffee houses take a very important place.

Apart from brothels, tango grows up in pension rooms, in humble houses crowded with families, “conventillos”. These were buildings wiht great number of rooms, very few sanitary services –most of them shared- that were hired in low prices to labourers.

Up to 1870 were used by black people, but soon they were inhabited by immigrants.

Abandoned southern houses kept many families. In it courtyards everyday life was shared with tango, curiosity and poverty.

Dancing lounges show the success of tango in bourgeoisie.

In 1913, tango is no more the provocative and unworried dance; changes its choreography into more elegant manners. French and eclectic styles sign buildings like Palais de Glace where Carlos Gardel was a frequent assistant. Big orchestras were the golden aim of many young tango enthusiastic dancers. 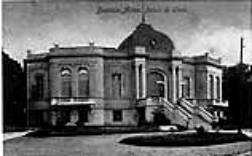 The exterior of Palais de Glace, when it was just opened. 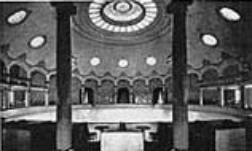 The interior of Palais de Glace, when it was just opened. 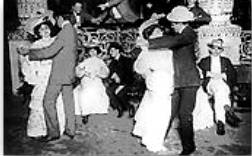 This consolidation period goes between de 20’s and 30’s of XX century. Plenty of contests and exhibitions, tango was the king in those days.

Tango liso (plain tango, without complicated choreographical forms) sounds at the tipical orchestras  rythm.Choreography centers in feet movement with precise forms as half moon or “8”. Bodies separate and the dance becomes more skilled with armonic and elegant lines.A completely raised up male torso gives the idea.

Popular dances help to set many orchestras with instruments like bandoneon,violin, piano,bass.Tango leaves its obscenity and the message turns universal, with humor and scoff additions. At the same time, melancholy and suffering for the lost beloved woman, appear.

In that moment, Tango was performed in theatre, as well as a song, as a dance, and in a new form: “sainete”. Many  theatre plays and sainetes included tango orchestras. Scenography was then more extended cabarets or “Cafetines” (coffee houses) than in conventillos.

The street and the corner

Streets and corners are protagonical spaces for tango. 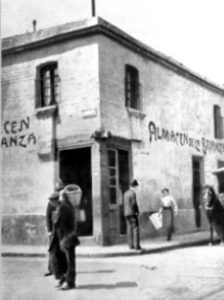 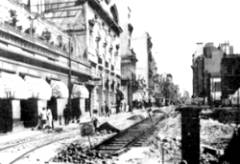 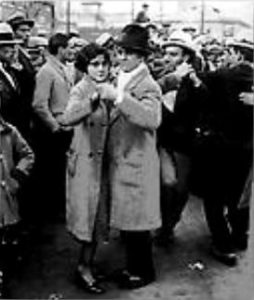 Dancing in the street.

In Guardia Vieja period, Cabaret, a french fashion was introduced. Gardel-Razzano, Francisco Canaro, Julio de Caro, Juan D’Arienzo, Carlos Di Sarli, Anibal Troilo  main names in tango’s history, will for ever be tied up to these places  of tango.

40’s main characteristic was massive return to tango: musicians, songs and singers got toghether in harmony; it was the period in wich many people as well as artists , danced, sung, composed and filmed the most about tango. A great development in creative terms was held by De Caro, Fresedo, Canaro, Firpo, Di Sarli, Troilo, D’Arienzo, Demare, Pugliese. Between  40’s and 50’s poets like Homero Manzi, H. Esposito and Catulo Castillo created unforgetable words in those tangos like: “Malena”, “La yumba”, “Recuerdo de Bohemia”. Discepolo will continue sending messages for lonely souls in “Martirio”, “Infamia” and “Uno”, whose music is from Mariano Mores. A great development in every artistic area is reached by this music: records, cinema, radio widespred its fame. Only in Buenos Aires one could find 300 simultaneous orchestras playing in different districts of the city. Clubs, theatres, lounges, multiplied everywhere tango encounters. So did cafes, cabarets and different social classes spaces.

Tango main characters and their homes

The houses where important tango singers or musicians lived,  has lately called  people’s attention to be recovered.

Coffee houses are, from the beginning of the century, protagonic places for tango,  poets and malevos. This start was the  basis of the great glories of tango. In Corrientes street, “Cafe de los Inmortales” was a meeting place for dramaturges, art critics, musicians, painters and journalists.

Angel Vargas used to sing in “Café Marzotto”, the very place were Alfredo De Angelis made his debut.Mitical “Café de los Angelitos”, a “tangueros” preference place, was one of Gardel’s obliged spaces.

San Juan and Boedo,  were “Café del Aeroplano” existed, was inmortalized in the lyrics of the tango “Sur”.Nowadays the actual cafe is called “Esquina Homero Manzi” and  has been declared National Historical Site by the National Law number 24.704 and included as a Historical Protection Area. Cafe Tortoni, as well, has been opened for the last 100 years, in Avenida de Mayo 800. 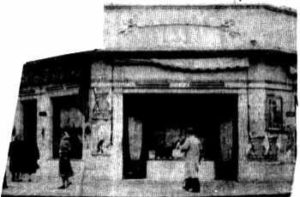 Aníbal Troilo “Pichuco” and his bandoneón.

Buenos Aires, as every big city, is a memory city. Porteño (city port inhabitant) is a nostalgical person and  refuses to abandon his memories. Most  original places related to tango have been definitely lost .None of the tango periods has had a  special attention in terms of rescue and conservation. Though tango is one of the most rich and important expressions from Argentina and Rio de la Plata people, it shows how few attention is conceided to the tangible places that resemble it.

Many are the causes of this disattention but the most importante are:

In the last years, “for export” expressions, dedicated to tourism, have made a great damage to the conservation of tangible as well a intagible heritage.

Nowadays, the original places of tango are in a serious extintion risk.

Though punctual actions and programs have been started, a global recoverable plan is needed.

To protect the few places that still exist is a way to comfirm the argentine people identity, and the best rescue should be to strengh conservation actions from an integrated point of view.

Tango in clubs and lounges.

(1) Milonga: african voice meaning  mess, problem, knot.It was used to name dancing houses from the suburbs and  the bwomen that worked there.Milonga… dancing lounges or “milongas”, as a name for the  musical style, started above 1870.

(2) Peringundines o piringundines: brothels and dancing houses. The owner charged the male clients for every dance and paid back to the women that helped the customers. Alcoholic beverages and some food was  served. In the back, rooms were used as a brothel.