The Architectural Heritage of Italian Colonial Period in Dodecanese 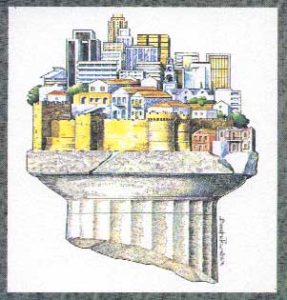 Standard fee £ 1.350.000, CICOP members £ 1.250.000. The fee includes: Rome-Athens and Athens-Rhodes round trip flights, 6 nights hotel accomodation with breakfast, guided visits to restoration sites, welcome reception at the University of the Aegean, informative material, dinner in a typical restaurant. Hotel located near the most important evidence of the heritage of the Italian colonial period.

Reservations at the CICOP secretariat by 15 February, with an advance payment of 10% of the fee.

The study involves students of the School of Specialization in “History, Analysis and Evaluation of Architectural Heritage and Environment” at the University of Florence with the Director Prof. Arch. Carlo Cresti and students of the Specialization Course “Implementation of Quality Systems in Recovery of Architectural Heritage” directed by Prof. Arch. Nina Avramidou.

April 4, 17.00: welcoming refreshment. Afterwards “Round Table” on the theme: “The colonian architectural heritage of Dodecanese: History, Degradation and Upgrading aspects”.

The italian partecipants at the Round Table are:

April 6, 9.00-13.00: Orfanotrofio, University of Egeo and other buildings (starting from Hotel Therme until the Stadium).

April 6, 15.00-17.00: new meeting among experts and all interested persons aiming at the set up of an interdisciplinary greek-italian task group, which intent to offer concrete contributes regarding the requalification project of the ex-colonial architectural heritage.

Report of the study trip

Rhodes and its architectural heritage were the themes that characterized the technical journey organized by CICOP Italy from 3 to 9 April 2001, which saw a culturally stimulating comparison between the technicians, students and representatives of CICOP and some of the most important Italian universities and the highest authorities of Rhodes and the Dodecanese University.

The theme discussed during the week was “The Italian colonial architecture in the Dodecanese, 1912-1947”, with particular attention to the current conditions of the architectural heritage involved, which manifests numerous and widespread warning signs regarding the “health” of buildings.

The importance and the fascination of the treated themes has aroused strong interest among the inhabitants of the place and the representatives of the local authorities (prefecture, region, municipality, university), who enthusiastically welcomed the group of technicians, professors, researchers and students. This gave us the opportunity to study, discuss and evaluate together the current state and the possibilities of redevelopment of the heritage involved, organizing an intense week of guided tours, conferences and pleasant welcome lunches.

The week of study and meetings opened on April 4 with an interesting technical visit to the buildings that characterize part of the seafront: the Mandraki, that is the Prefecture of the Region, the National Theater, the Town Hall, the Albergo delle Rose, the Trapeza Ellados, the Marine Inspectorate. The group was accompanied by the architect Georgios Karydakis, responsible for the architectural and cultural heritage of the modern heritage of Rhodes and other local technicians and experts.

At the end of the visit, all the participants were welcomed with an official lunch at one of the municipal offices.

In the afternoon, scholars of the University of Aegean, the University of Florence, Naples and Basilicata, members of the CICOP, technicians and experts from the Municipal Administration of Rhodes and the Prefecture of the Dodecanese have held an expected conference-debate on the aims , the intent and potential of a future collaboration in a common effort, aimed at safeguarding the colonial heritage in Dodecanese.

At the end of the conference participants were offered refreshments on the terrace of the Aktaion building, located along the Mandraki.

The technical examination carried out on April 5 involved the marine aquarium and some representative buildings facing the “Slargo delle Cento Palme”, theme treated as “Evaluation of functional and aesthetic-perceptual consequences after modifications of intended use”.

The group was then officially welcomed, with sympathy and great cordiality, by the first citizen of Rhodes, Dr. Savas Karajiannis, who then kindly invited guests to a welcome lunch at the former Albergo delle Rose, the current Casino. On the same day it was possible to visit the old city (declared World Heritage Site), accompanied by experts from the Superintendency for Antiquities of the Dodecanese.

On 6 April a study visit was carried out at some of the most representative and most degraded buildings of the colonial period.

A second meeting-debate was held at the University of the Aegean (local administrative and academic authorities present), honored by the presence of the Italian consul.

The days of study and debate were characterized by pleasant official meetings, which were followed by cordial welcome events and welcome refreshments at the Dodecanese prefecture and at the University of the Aegean.

At the conclusion of the inspections and discussions and talks developed during the study week, and consistent with the needs and concerns expressed by the Dodecanese authorities for the current conditions of the buildings studied, an important agreement was agreed and signed laying the groundwork for the redevelopment of the heritage in question. Starting from four buildings chosen for the initial intervention phase (Nomarchia, Teatro Comunale, Elli’s Bathing Establishment, Nea Agorà in Mandraki), this Convention intends to involve the entire architectural heritage concerned, which involves more than two hundred significant buildings, both in Rhodes and in the other Dodecanese islands.

The signed agreement was signed between the University of the Aegean “Mediterranean Studies” (Greece), the University of Florence (Italy), the Aegean authorities and their respective associates, and intends to develop a joint scientific research program technique, applicable to the rehabilitation (recovery) and conservation (with maintenance) of the buildings built in Rhodes in the period 1912-1947 by the Italian governorate. It fits into the spirit of the 1985 Granada European Convention concerning the protection of Europe’s cultural and architectural heritage; with this Convention the Council of Europe, considering the necessity of a close union among its members for the safeguard of the common architectural heritage (which is an irreplaceable expression of the richness and variety of the European cultural heritage), considering the actions and what else in the subject has already been promoted by the governing bodies of the Community, it has intended to define the commitments that each party is called to fulfill for the protection and enhancement of the European architectural heritage.